Many thanks to Lada for supplying me with the complete Bambi Molesters setlist from the Sonic Bullets festival, for all who like to keep abreast of these things:

Thursday December 4th
We fly into Zagreb, which it seems is to be cold and wet for the duration of our visit, but we refuse to be downhearted.  Firstly, Zagreb is a lovely, friendly city and secondly, on previous visits we have had to contend with snow piled high on the pavements and snowploughs clearing the runway so that we could return to the UK, so a chill in the air and a little (ok, at times a lot) of rain will not deter us. Oh, and thirdly, we are here for the Sonic Bullets Festival, to celebrate twenty years of The Bambi Molesters, who, it is no secret, are my favourite band in the whole world.
We make the short bus journey from Zagreb airport to the centre of town and walk to our hotel, pausing only to remind ourselves of the precise location of the entrance to the Tvronica Kulture, just so we know exactly where to go tomorrow night. Safely checked in, we make our way to Jelaćić Trg, through the bustle of Dolac Market to our favourite Zagreb bar, Ro and Do. Which is about to shut for the afternoon! However, the barman takes pity on us (looking like drowned rats might help here) and we get our first Ožujsko of the trip. The barman is clearly in a hurry, though, so we head down the road for a couple more in Carpe Diem, before returning to the hotel.
Being creatures of habit and weak of will, we are back at Ro and Do in the evening, where a different barman questions the wisdom of ordering Ožujsko and points us instead towards Crna Kraljica, a really rather excellent dark lager. He is also good enough to suggest The Royal India as a good place to eat and this also proves a good choice, so we promise to return for a nightcap after we’ve eaten. This is proving to be a good trip already. 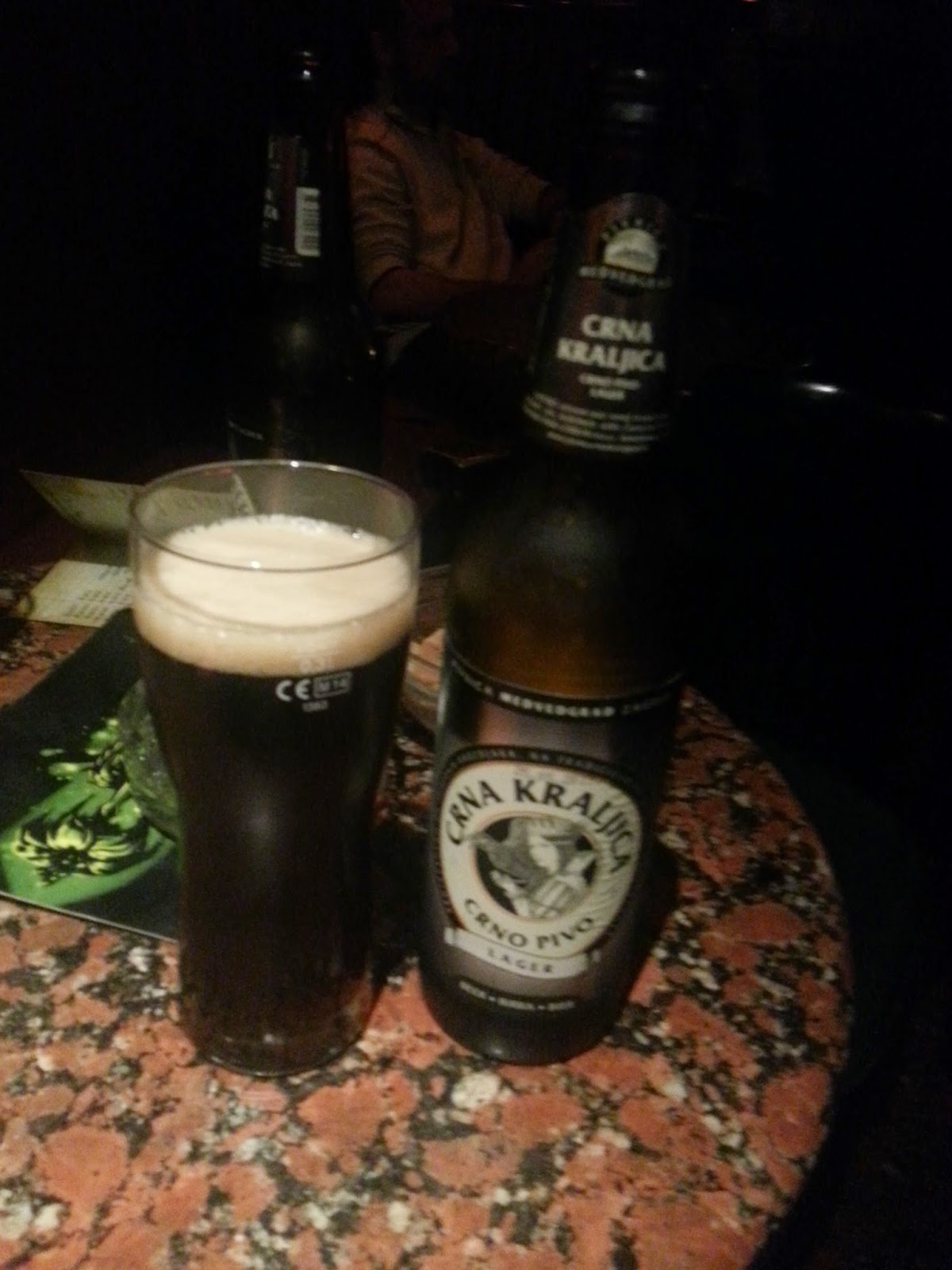 Friday December 5th
We breakfast in the hotel, then head out to explore the city some more. Just north of the central station a large and complicated open-air ice rink is being prepared and we make a note to return to watch the opening later in the day, before heading for the Croatian Parliament building, where we wonder at the apparent lack of security, as a petition of some sort is presented outside the main entrance.
Nearby Lotrščak tower is next on our agenda, to watch the midday gun go off. We’ve witnessed this before, so I prepare myself by sticking my fingers in my ears, but to no avail; the gun goes off and I still jump out of my skin!
We’ve arranged to go the Tvornica Kulture for 4:00pm to say hello to The Bambi Molesters and it’s lovely to see them all again. They’re understandably excited about tonight and also about the just-announced January tour of Brazil, but they’re also pretty busy, so we make our excuses and head back into the city.
It is the season of Advent and Zagreb really does look beautiful as night descends; trees bedecked with white fairy lights, Christmas market stalls, stages and bandstands offering entertainment and everyone, or so it seems heading for the opening of the open-air ice rink. The crowds are such that, to be honest we see very little of the ceremony, although we do catch a few glimpses of some quite spectacular ice dancing, but it’s cold and we’re hungry, so we don’t hang around for too long and make our way to Zrno Bio Bistro for a rather excellent vegetarian meal. 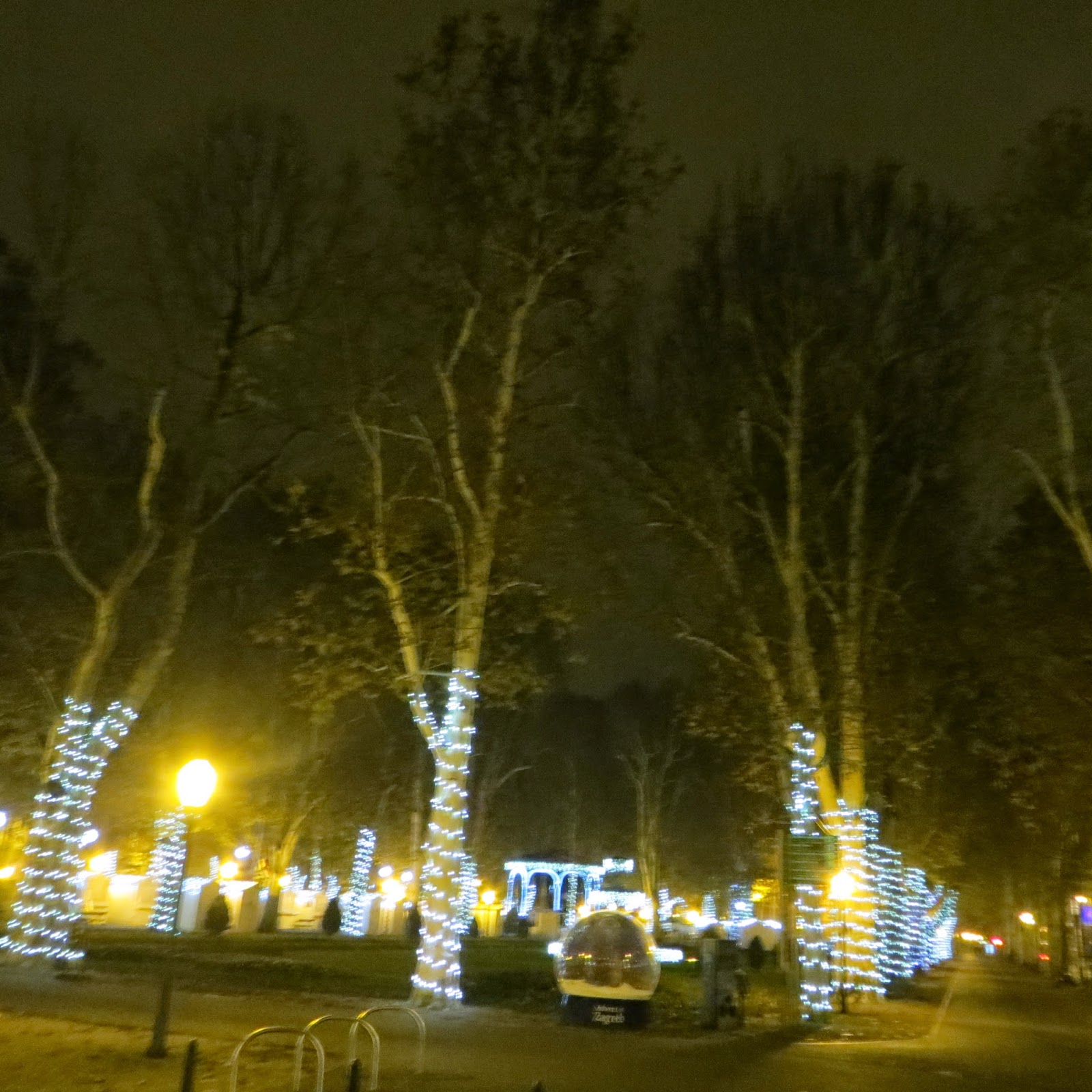 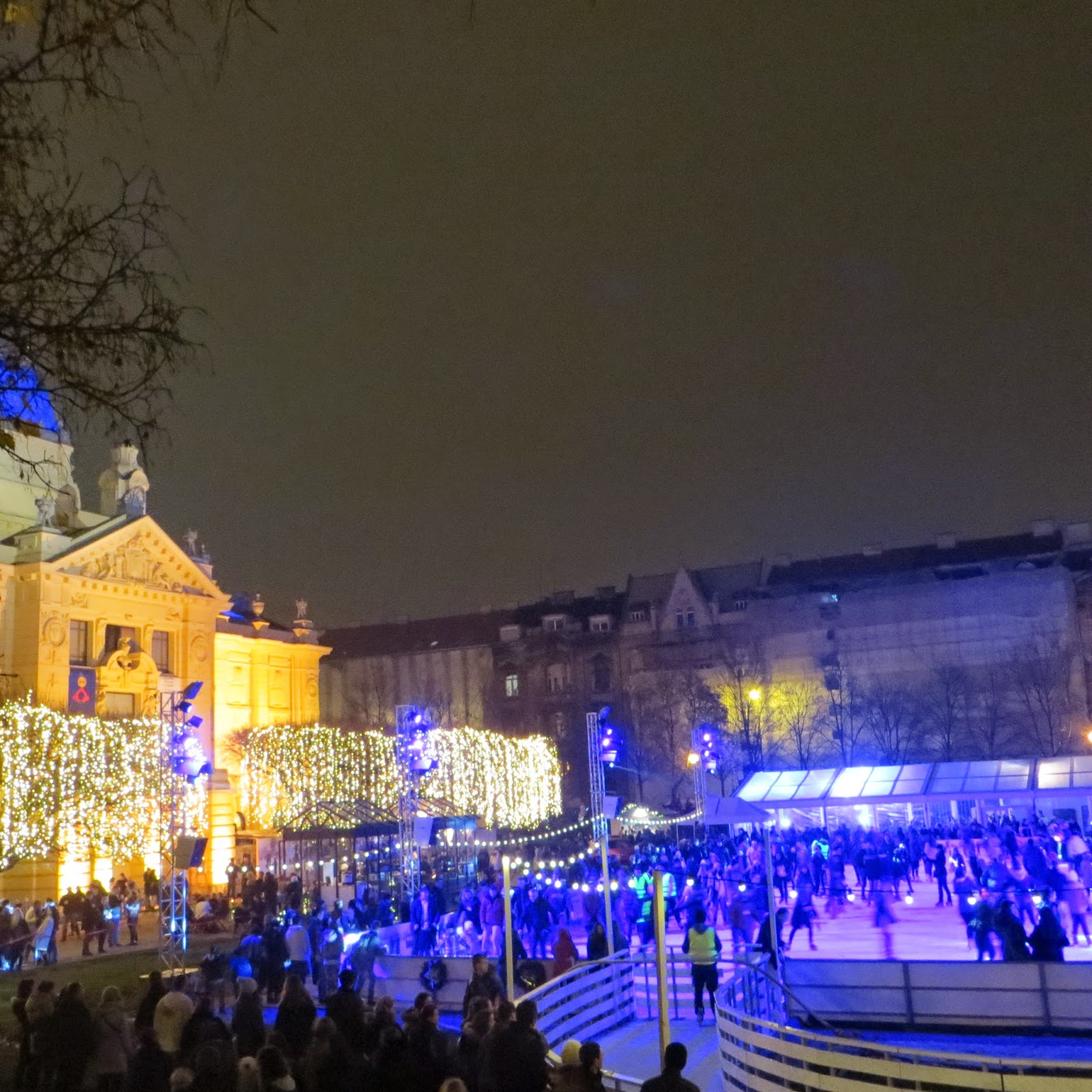 Tvornice Kulture
We’re at the venue for 8:30 and have a short time to spend backstage where we chat with the band and get to meet Chris Eckman and Hrvoje’s brother, amongst others (and Hrvoje also hints that maybe, just maybe, there will be new Bambi moletsers material next year), but first band of the night, B and the Bops are about to take the stage so we go out to see them.
We’ve been to the venue before, but on that occasion the main room was out of commission for some reason and The Bambi Moletsers played in a tiny (and packed) adjacent room, so this is our first real look at the venue proper. It’s pretty huge with a capacity of 1800 and feels fairly sparsely populated at the start of B and the Bops’ sparky rockabilly set, but it fills gradually and by the time My Buddy Moose hit the stage is beginning to feel pretty full.
My Buddy Moose frontman, Luka Bencic is part of The Bambi Molesters live band, so we’ve met him on a few occasions and it’s really good to finally see him in action with his own band, who kick up quite a storm and get a good reaction from the crowd.
And so to the main event. It’s a twentieth birthday party and The Bambi Molesters set includes highlights from the whole of that period. They open with Wanganui and for the next 45 minutes are at their dazzling, spellbinding best. In addition to Luca, the band are joined by the excellent Soldiers of Love horn section, so for much of the set there are seven of them on the stage, weaving their magic. Point Break, Farewell Malasaña, Theme From Slaying Beauty, Siboney, As the Dark Wave Swells, a simply stunning Invasion of the Reverb Snatchers… And the band seem to be having a wail of a time.
Then Chris Eckman takes to the stage and we’re not watching The Bambi Molesters any more, but instead The Strange. It barely makes a difference, to be honest. OK, this isn’t instrumental music anymore, but the band’s grasp of drama, dynamics, atmosphere and melody remains the same and the crowd is completely in their thrall. 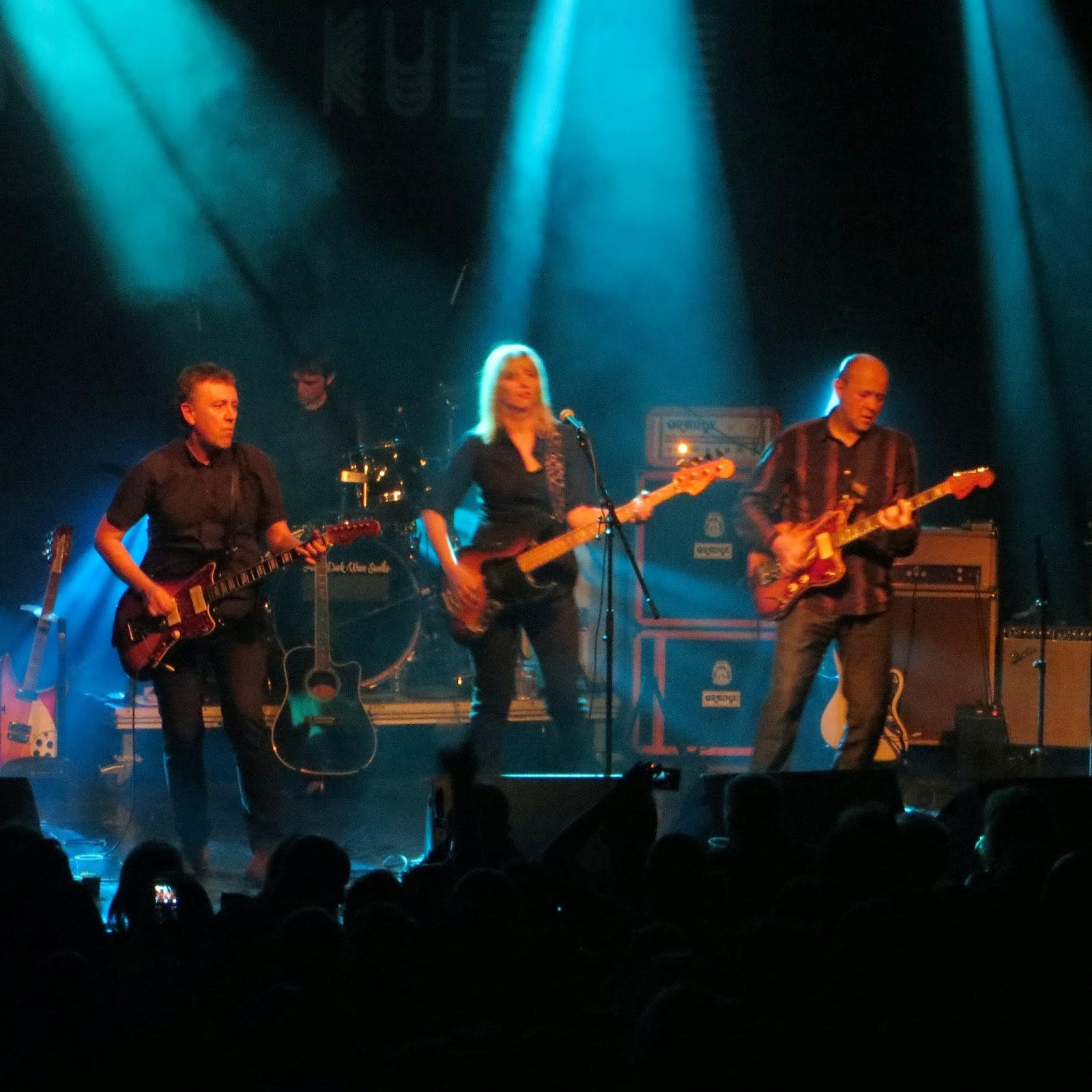 A note for gear enthusiasts;  I’d been wondering how Dalibor’s recently acquired Rickenbacker would work with The Bambi Molesters, since we’ve grown so used to hearing him play a Jazzmaster, but he plays the new guitar throughout this portion of the show and it sounds mighty fine to me and it returns several times  later in the night.
The Strange section of the evening lasts for around 25 minutes and then we’re back to The Bambi Molesters to take us through to beyond 12:30, when they close with Malagueña. The crowd want more, of course and we know we will get it, since there’s been no Latnia yet and, sure enough they return to play it, with Chris Eckman joining on acoustic guitar to make The Bambi Molesters an eight-piece for the finale.
I can’t really be subjective about the Bambi Molesters; I love their music and I like them very much as people. Every time I’ve seen them has been special to me in one way or another, but this show was awesome. I’ve never seen a surf band play to such a huge and enthusiastic audience and I’ve rarely seen one play as well. Tonight will live long in my memory.
As they finally leave the stage, the crowd starts to thin quite considerably, but The Bambis clearly want to party and have invited along one of their favourite bands, The Flaming Sideburns to close the show. We watch maybe 20 minutes of their raucous, rocking garage set, before giving in to exhaustion and staggering back to the hotel. In our defence, we have an early start in the morning and I am due on stage in Brighton in around 20 hours and we have to make the house ready for our guests Surfer Joe and his band, but that’s a whole other story…
Posted by Unknown at 11:04 No comments:


Wanganui
The Bambi Molesters
Play Out of Tune


Last Ride
The Bambi Molesters
Sonic Bullets: 13 From the Hip


Farewell Malasana
The Bambi Molesters
Sonic Bullets: 13 From the Hip


Bubble Bath
The Bambi Molesters
Sonic Bullets: 13 From the Hip


Theme From Slaying Beauty
The Bambi Molesters
Sonic Bullets: 13 From the Hip


Thunderin' Guitar
The Bambi Molesters
As the Dark Wave Swells


Mindbender
The Bambi Molesters
As the Dark Wave Swells


Glider
The Bambi Molesters
A Night in Zagreb


Chaotica
The Bambi Molesters
Sonic Bullets: 13 From the Hip

The Eagles
Smash Hits from...


Ace of Spades
Link Wray
The Best of...

Here is the playlist for HangNine FM show on North Sea Surf Radio, first transmitted on November 8th 2014, including a countdown of my top 15 surf revival tunes

The Eagles
Smash Hits From The Eagles


Let’s Go Down to Brighton
The Razorblades
Gimme Some Noise

Here is the playlist for HangNine FM show on North Sea Surf Radio, first transmitted on November 8th 2014, including a countdown of my top 15 classic surf tunes

The Eagles
Smash Hits From The Eagles
Cat on a Hot Foam Board
The New Dimensions
Cowabunga! The Surf Box